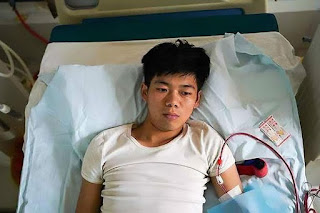 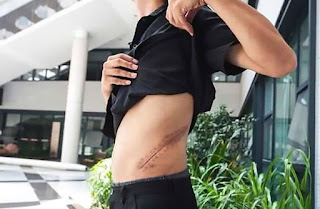 Wang Shangkun, now 25 was so desperate for Apples flagship iPod and iPad devices, he decided to sell his kidney in 2011 on the black market in East China
He received 22000 RMB and purchases a Iphone 4 and iPad 2 with the funds.
He was told ''Why do I need a second kidney ? One is enough"
Local Chines media recently revaled Wang now spends his days in bed and relies on dialysis to survive his kidney failure.
He developed renal deficiency not long after the illegal surgerym, which is belived to have led to an infection due to place and the apparent lack of postoperative care.
He was also forced to give up his studies and lives on social benefits.
Nine people were arrested in connection with the case and five, including the surgeons who harvested his kidney, were jailed in 2012
His family was eventually awarded 1.47 million RMB in compensation later the same year .
Reports at the time revelaed that wang desperately sought the new iPhone in order to show off to his friends.
His family, however, who live in one of Chinas poorest provinces, could not afford it, so he turned to  other means to raise the money.
If you want to be buddy donors please contact admin via Whatsapp .Proceeds from donations will be used to extend the domain Aexdroid.com. Thank you