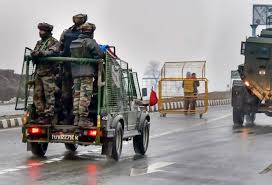 Pakistan's terrorist organization Jaish-e-Mohammed took responsibility for the Pulwama IED terrorist attack. By sending a message to the Kashmiri News Agency GNS, the organization described itself as responsible for the attack. So far 44 people have died in this attack.

According to the report, the attack took place when the CRPF jawan's convoy was going from Jammu to Srinagar. There were 70 vehicles loaded with jawans in that convoy.

According to the report, police identified a terrorist of the Pulwama attack as Adil Ahmed. It was joined in 2018 by the terrorist organization Jaish-Mohammad.

CRPF DG RR Bhatnagar said that about 2500 soldiers were involved in the convoy going from Jammu to Srinagar. Investigation of senior officers on the spot is ongoing. The injured is being cared for.

Congress President Rahul Gandhi said, "I am very sorry for the attack on the convoy of CRPF in Jammu and Kashmir. I am sorry for the families of the martyrs. I wish the wounded to be well soon."

Congress general secretary Priyanka Gandhi canceled her first press conference in Lucknow. They said, "Our soldiers have died in Pulwama. In such a situation, it is not ok to have a political discussion. After this attack, I do not think this is the right time to do press conferences. Therefore, I can cancel it. "

After the martyrdom of 40 CRPF martyrs in the Pulwama attack, the Jammu and Kashmir administration has lifted the security cover from five separatist leaders including Mirwaiz Umar Farooq. The other four separatists who have been removed from the security cover are Shabbir Shah, Hashim Qureshi, Bilal Lone and Abdul Gani Butt

Fearing a surgical strike, Pakistan has removed its terrorists from the border. They have been removed from the launch padas (from where the terrorists are sent to India) to the inner parts of the country. Explain that tension has increased between India and Pakistan since the Pulwama attack.